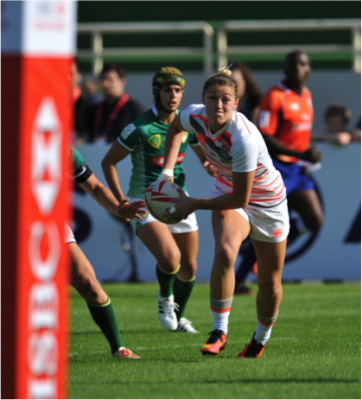 Lions coach and Wasps fullback Katie Mason has been called up to the England 7s squad for the HSBC World Rugby Sevens Series.

Katie is part of the squad that will play back to back tournaments in both Dubai and Cape Town throughout December.

Over the past two seasons Lions, along with Snap Sponsorship, have sponsored Katie while she has been at Wasps. Something she says has helped both her and the club.

The support that Lions have shown Katie, both through sponsorship and opportunities, has not gone amiss.

"I am very fortunate to work for a company that are so supportive of my passion for rugby and the commitment involved to succeed in the women’s game,” said Katie.

“Working at Lions has allowed me to utilize the knowledge from my previous profession, as a PE teacher, as well as learn new skills to progress my career.”

This won’t be Katie’s first taste of international duties. She was in the 7s squad for the tournament in Biarritz, France, last year and during the 2016/17 and 17/18 seasons.

In fact, over the past season, Katie has also been part of the Barbarians squad. She travelled to Denver, USA, in April this year to take on the Americans.

Katie works full time at Lions. She also plays full time for Wasps. Something not uncommon with other Tyrell’s Premiership players. Being able to balance her time between the two and find the time to travel and represent her country is something, she says, is largely down to her employers.

“Having employers who see the benefit of having someone like me work with them is a fantastic feeling. It is a huge bonus that Lions are also flexible with my working hours.

“This wouldn’t be possible without the continued support of the staff at Lions. They allow me to continue chasing my dreams by having time off to represent my country,” Katie explained.

“We are delighted to support Katie in continuing to chase her dreams of playing rugby for England. She is a brilliant role model for youngsters everywhere and a brilliant asset to Lions Sports Academy.”

Good luck Katie! We are all so proud of you here at Lions.

Lions coach and Wasps fullback Katie Mason has been called up to the England 7s squad for the HSBC World Rugby Sevens Series.

Give us a call or drop by anytime, we endeavor to answer all enquiries within 24 hours.